How to Grow a Kombucha Scoby- From Store Bought Kombucha 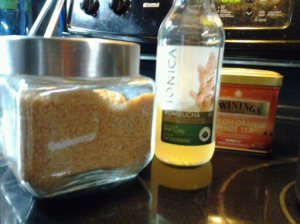 I do enjoy the occasional kombucha…but at about $4.00 a pop, they’re not exactly cheap.  Combine a financial incentive like that with the fact that I like to do things myself, and you can see why I’ve wanted to try my hand at making kombucha for a while.  I only needed to decide was how to go about it- should I purchase a kombucha SCOBY (symbiotic colony of bacteria and yeast), or should I try to grow one from a bottle of store-bought kombucha?

I recently did a search on where to buy real kefir grains- after having come to the realization that the kefir starter from the healthfood store did not, in fact contain them- and came across the website of a woman who calls herself ‘the kefir lady’. This woman sells both kefir grains and kombucha scobies. I’m considering buying kefir grains from her, even though her preferred means of accepting payment is rather bizarre. In any case, if I were to order grains it would make sense to order a scoby at the same time- but if I were to succeed in growing my own, that would, naturally, be unnecessary. 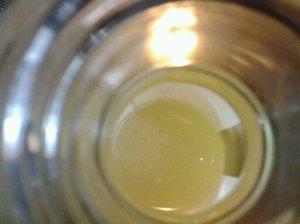 Floating in the Bottle

The first thing I did was pick up a bottle of kombucha, which I made certain contained a little baby scoby (about the size of a dime).  A quick google search enabled me to find some instructions on growing it, on a blog called Paprika. I also, however, came across another post on a blog called Food Renegade, which stated that growing a scoby from a store-bought bottle of kombucha was no longer possible, due to the way commercial brands of kombucha in the US had been reformulated in 2010. 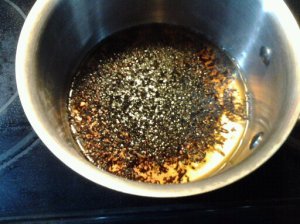 Luckily, I don’t live in the US, nor have I seen any brands of kombucha from the US for sale here, in Montreal. So, I decided to go ahead with my experiment.  The process is fairly simple.  One must simply make a sweetened tea (using 1 cup of water, 2 TBSPs of sugar, and 1 TBSP of black tea), allow it to cool, then add about half the bottle of kombucha (making sure to include the baby!).  This should be stored in a glass jar, and covered with cheesecloth, some other type of mesh, or a kitchen towel, to keep out flies.  Cover the jar with another kitchen towel to keep the baby warm, and protect it from the light. Within a few days, you should be able to see some growth. After about two weeks, your scoby will likely have extended itself to the edges of the jar, and will be growing thicker. 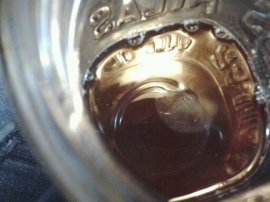 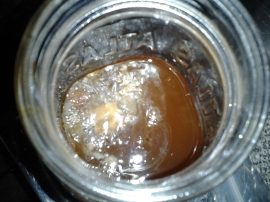 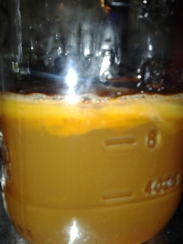 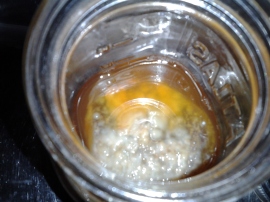 At this point, the scoby has likely used all (or most) of the food you have provided it with.  It’s time to make a new, larger batch of sweetened tea for it.  Use 4 cups of water, 1/3 cup sugar, and 2 TBSP black tea, again waiting for the mixture to cool to room temperature before immersing the scoby in it. Store it the same way as before, in a bigger jar, if necessary. 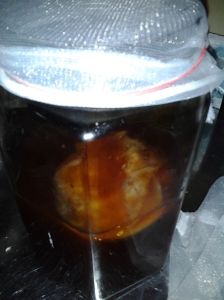 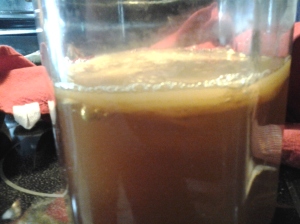 After about a week, the scoby had grown quite thick, and I decided to try brewing my first batch of Kombucha.  The process is very much the same, though the sugar/water/tea proportions are a bit different.  I followed the recipe given in Sandor Ellix Katz’s book Wild Fermentation (p.123), which calls for 1/4 cup sugar, 1 TBSP black tea, and 1/2 a cup of kombucha liquid (the scoby-growing liquid, or some liquid from your last batch of kombucha) per liter of water.  I was quite pleased with the result, which was ready in a little under a week (to determine whether it’s ready, just taste it).  I decided to try using 1/2 jasmine tea, and 1/2 black tea for the next batch (one can use only green tea, but according to the Cultures for Health website, which is a great source of kombucha info, it isn’t the best thing for the scoby), and that was quite nice as well.  The jasmine gave it some interesting floral notes. 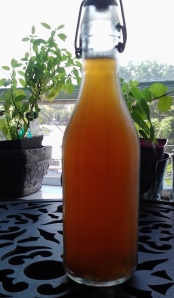 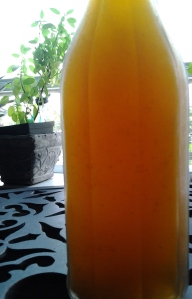 The brewing process is quite painless, and it’s easy to simply strain the finished product into bottles, and start a new batch.  I look forward to experimenting with different flavours…but first I’ll have to do a bit more research on what I should and shouldn’t use (for example, it is possible to use Earl Grey tea to make Kombucha, but using it often is not recommended due to the bergamot oil it is flavoured with).

Well, ’til next time, happy fermenting!

Please note: I have discovered a source for Kefir grains in Montreal!  See this post for details.

Also note:  If you’d like to skip growing your own scoby, and get right to brewing, I may be able help you out (if you’re in the area) by providing you with a nice, thick scoby.  I also have some worms for vermicomposting, if that’s your thing.  Donations will be accepted.

#penguins
Brewing some #angel #tea on this rainy day. @real_thesaurustea
#blossoms Here today, gone tomorrow...
Here's my new friend, again.
New friend? Is it a groundhog? A baby beaver? Not sure...
It's #garlicmustard season again! #foraging