I’ve recently set my mind towards trying to identify which edible (or otherwise useful) plants I could discover growing close to home…whether in my boyfriend’s yard up north, or near my apartment in Verdun.  Getting started with plant identification may not be the easiest thing, but once you learn the name of a certain species you will likely have no problem identifying it when you come across it again, and indeed, if it is a weed, will start to see it everywhere!

I had been wondering about one wildflower with very peculiar purple flowers which I had noticed grows all over my boyfriend’s lawn.  I was finally able to identify it by browsing through some wildflower photos on my wildflowers.com.  I originally checked my Peterson field guide, Edible Wild Plants: Eastern/Central North America, but I didn’t have any luck there.  It is called Self-Heal, and is also known as All-heal.  After determining the plant’s name, I was easily able to do a

bit more research into its possible uses.  It is in the mint family,  and the entire plant is edible.  It contains the vitamins A, C, and K.  Medicinally, it can be used as a poultice to treat wounds, or as a tea for sore throat.  I collected some, and decided to use the flowers and stems to make tea, and to add the leaves to a salad.  The tea, which I drank cold, was quite flavourful and meaty- a bit like stinging nettle tea.  I found it tasted a bit mustardy, as well.  Overall, it was quite pleasant.  The leaves, when added to a salad, were a little unremarkable, but good.

Yarrow is another plant which I have seen growing in abundance in the yard.  It has also traditionally been used to help heal wounds (hence another of its common names, ‘soldier’s woundwort’).  Its fernlike, aromatic leaves, and distinctive flower centers (which are actually made up of small disc flowers) make it fairly easy to identify.  However, one must make sure to positively identify it, as one who is not paying much attention to its distinguishing characteristics

may mistake it for poison hemlock.  In lig 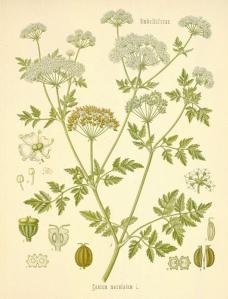 ht of this, I would like to present you with two drawings which outline the distinguishing features of each plant: As you can see, they are quite different.  The leaves of the poison hemlock resemble those of carrot or parsley, while those of yarrow are fern-like.  The odor of the poison hemlock is rank, while that of yarrow leaves is pleasant and herbal.  Finally, hemlock flower stalks radiate from single points in umbels (like an umbrella) while yarrow flower stalks are more half-hazard, and, additionally, the

appearance of the individual flowers is quite different.  If you are paying attention ( as you should always be when harvesting food from the wild), it is easy to spot the differences between the two.

Besides its use in wound-healing, it has been used medicinally for pain-relief (for menstrual cramps, headaches, and toothaches), as an anti-inflammatory (to reduce fever), and as a treatment for colds and sore throats.  In the culinary arena, it has traditionally been used in beer-making, to make liquors and bitters, and also as a cooked vegetable and seasoning herb.

After tasting both the flowers and the leaves, I learned that the flowers were quite bitter, while the leaves were rather bitter-sweet and reminded

me a bit of lavender or rosemary.  I decided to use the flowers to make a tincture, and use the leaves as an herb.  I figured I could use the tincture both as a bitter in cocktails, and medicinally.  The tincture worked out quite well, turning a pretty pale green and becoming quite bitter during the two weeks I let it steep.  I chopped up the yarrow leaves and mixed them with some chopped up onions and mushrooms to make a stuffing for fish, and that was quite good, also.  I’m not quite sure why it is no longer used as an herb, but I plan to collect more this summer, dry it, and use it both as a tea, and a seasoning.

On to wild strawberries.  These are also easy to identify, as they look just like the strawberries you buy at the store…only they’re much smaller, and more flavourful.  If you’ve ever grown strawberries (or seen them grow) you will immediately recognize their leaves.  In order to find more berries, one must simply follow the runners (shoots the plant produces in order to propagate itself).  The strawberries up north (in the Laurentians) usually appear in July.  They are not as sweet as commercially grown varieties, and their flavour is more concentrated.  Eat them as they are, or

use them in any preparations you wish.  Also, I recently came across a blog, Wellpreserved.ca, which suggests drying strawberry hulls and using them to make tea.  I think that this is an excellent idea!  No waste!

Anyway, until next time, happy foraging!