Tonight I attended my first ever Concordia Alumni Relations event: ‘an evening of beer tasting and food pairing at Bier Markt’. Though I had never heard of Bier Markt before registering for the event, I have since learned that it is an Ontario-based chain whose Montreal location has been open for a couple of months. It is located on Rene Levesque where high-end steakhouse Queue De Cheval used to be. Having never been to Queue De Cheval, I can’t say how the restaurant’s appearance has been altered since that time, but I can say that the decor is quite nice. I found the bricks on the ceiling especially interesting.

The place was quite busy when I arrived at about six. I checked my coat at the (free) coat check down stairs, then headed upstairs and checked in at the Concordia table. I eyed the menu which was table d’hôte style for the group and included 3 courses with a beer ‘pairing’ to go with each course, all for a flat fee of $30 which included tax and tip. This was quite a deal, especially when one takes a look at their regular prices. I also scanned the beer menu, which includes over 150 beers, about a third of which are on tap.

The waiter who took our order was nice enough, and took the time to give us his recommendations food-wise. We received our first beer, the Palm Speciale Belgian Ale. Its menu description reads: ‘Brewed approximately 40 miles outside Brussels in Steenhuffel, Belgium, Palm is a well-balanced, approachable amber Ale that is full-flavoured up front and finishes with notes of spice and citrus.’ I thought it had a good, if not particularly remarkable, flavour,  some bitterness, and altogether was very drinkable. As it was only a half-pint of beer, and the wait for the first course wasn’t short, I drank about half of it before the soup arrived.

The mushroom soup consisted mostly of an oily, lukewarm broth, which was faintly mushroomy in 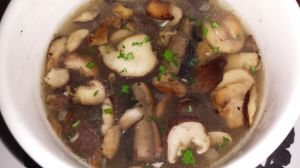 flavour. There were some sliced mushrooms (mostly button) in the soup as well, and some parsley floating on top. Needless to say, it wasn’t very good. I think I could have produced something similar in about five minutes with a mushroom stock cube and some button mushrooms. Okay, so to play the devil’s advocate here: I know that groups can be a pain, and that maybe the cooks thought the people in the group wouldn’t really appreciate/pay attention to the food. However, this soup is on the regular menu (so they should know how to make it), and soup is the easiest thing to prep a large quantity of ahead of time. For those reasons, I think the devil’s going to have to accept defeat, here. Since no beer pairing could have enhanced this soup, the beer-food pairing was a fail.

Service started to get spotty at this point. The wait for mains was, again, not short, but the real issue was that our beers arrived when we were half-way through our main courses. This was an especially glaring faux-pas considering the nature of the event. It is apparent to anyone who has ever poured draft beer that (surprise!) it takes time to properly pour draft beer. Yes, they were busy. However, this problem could have been avoided by either pairing a bottled beer with the main, or offering different beer pairings for each of the three options. Pairing the same beer with each of the three different mains doesn’t really make sense anyway- if you take food-beer pairing seriously- which Bier Markt doesn’t really seem to do. In any case, the food should really have been held until the beer made it to the table. 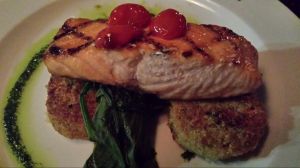 As for the food itself, considering the fact the I don’t eat meat, I was forced to choose the Atlantic salmon, something I don’t usually eat due to both sustainability and health issues. That said, the portion was large, and the fish was properly cooked and seasoned, though some fresh herbs and perhaps a wedge of lemon to give it some zip would not have been out of place. The tomatoes were fine, though not flavourable enough to add much to the equation, and the garlic chips, though properly cooked, were too few in number to enhance the salmon.  The quinoa cakes were good, though they also could have used more punch, and the bok choy and wilted spinach were fine…but unremarkable. Concerning the proportions of the dish, I could have done with a smaller portion of fish, only one quinoa cake, and more vegetables.

When I finally received my pint of Erdinger Weissbier, I found it quite enjoyable. The menu description reads: ‘This Wheat Bier

comes from Erding in the heart of Bavaria. Erdinger Weissbier has a beautiful golden-straw colour that owes its Champagne-like effervescence to keg fermentation. Brewed according to the Bavarian Purity Law of 1516, Erdinger is an excellent match with seafood or chicken dishes.’ While it is easily the most bitter wheat beer I’ve ever tasted, it also has some of the lightness and sweetness one expects from wheat beers. While I found it quite enjoyable on its own, I wouldn’t say it went particularly well with the salmon.

The next beer to arrive was the Früli Strawberry Wheat Ale. Its menu description reads: ‘Früli is a unique blend of high-quality, lightly hopped Belgian White Bier and pure strawberries. This all-natural Bier is a soft, refreshing
indulgence that is perfect to be enjoyed as an aperitif, with a salad, or even as a dessert’. The intensity of the strawberry flavour was actually surprising. It reminded me of Fragoli, a wild strawberry liqueur. It definitely makes an interesting dessert pairing.

The dessert itself, however, left a lot to be desired. I chose the chocolate cake, seeing as how late February is not exactly the season for strawberries in Montreal. It was okay, though I ate it more out a sense of duty than anything else. Though described as being a dark chocolate cake, the depth of flavour just wasn’t there, and I could taste no hint of mocha. 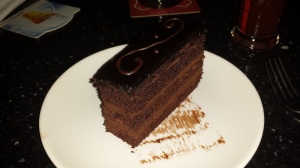 If coffee or tea was eventually offered or not, I don’t know, but by the time I left, it still hadn’t been. Having only visited Bier Markt this once, I can’t comment on any of the other menu items, but, personally, I’d recommend steering clear of the food. If I do go back, it will be for the beer, and perhaps the oysters (of which they offer four different kinds).

← Restaurant Reviews & The Industry in General
Some News →

There was an error retrieving images from Instagram. An attempt will be remade in a few minutes.